Our asparagus soup recipe called for chicken stock, and since we were were had scraps from our chicken anyway, we decided to make our own stock. It wasn't particularly hard, but it takes quite a while. 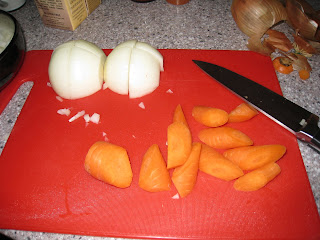 Laura cut an onion in 8 and cut up a carrot. 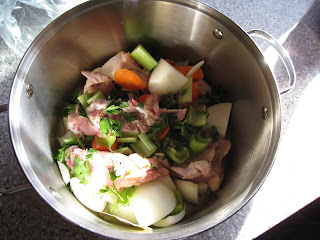 We combined the left over chicken scraps (neck, spine, and wings and some other bits) with carrots, onions, celery, parsley and a bay leaf. 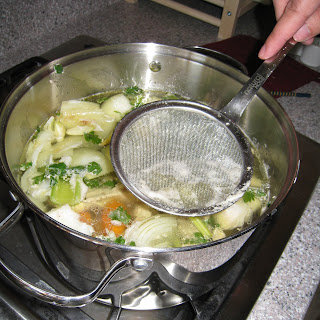 Skimming the foam from the top of the stock. - this was a bit difficult because we cut up the parsley, so it was floating around in the way. Next time, I think we leave the parsley bunched. 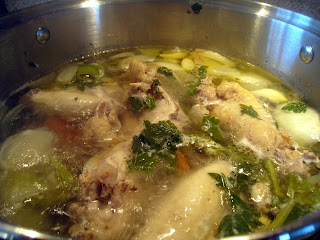 The stock, starting to take on some color. 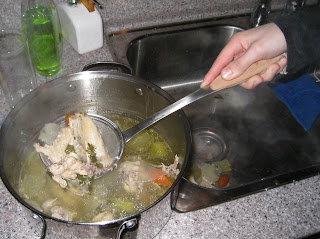 After about 2.5 hours the stock was done. If we had a collander (or cheese cloth), this probably would have been easy, but we had to remove the solids from the stock with a skimmer. Once most of the big stuff was out, we strained it through the skimmer in to a clear glass bowl. 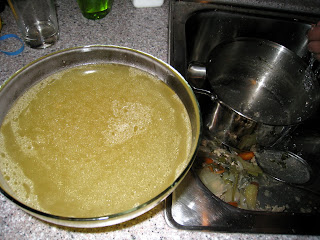 All done, but a little oily. Viewed from the side, you could see a couple millimeters of oil on the surface. 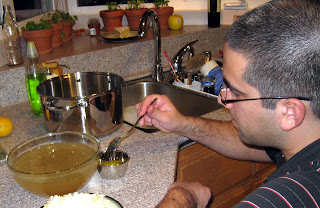 Normally the best way to remove the oil from stock is to allow the stock to chill, so the oil solidifies. Unfortunately, we wanted to use the stock right away, so I carefully skimmed the surface with a spoon. 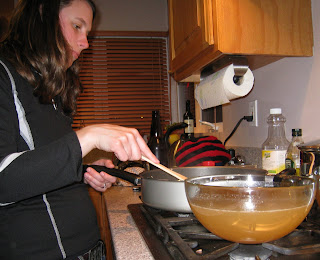 Our final product - ready to go into the soup that Laura is preparing.
Posted by Unknown at 3:29 AM
Labels: photos
Email ThisBlogThis!Share to TwitterShare to FacebookShare to Pinterest