There's been less incentive to cook a full meal, since Laura went home, so this weekend I just messed around in the kitchen.

There's a small store across the street from here that sells fruit and vegetables. I bought some jicama. Jicama's a root, but the inside is really juicy (the flavour isn't very strong quite watery and just slightly sweet). At work, they often use jicama in fruit salads and it's also used in a malay salad call Rojak (which I definitely need to make). This is what the it looks like before cutting: 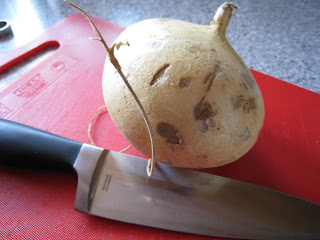 The inside is all white. 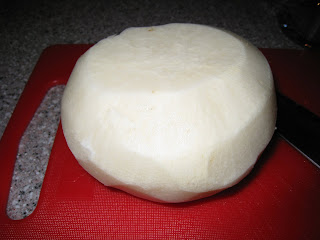 I didn't do anything exciting with the Jicama this time - I just cut it into strips and ate it raw.

We had bit of wine left over from a few weeks ago when we made risotto, and Laura left an apple behind, so I decided to see what would happen if I poached it. I heated hot wine with and added cinnamon, about glob of honey and some lemon thyme. I added sliced, peeled apples to this and let the apples cook until they were slightly soft. Because there wasn't an abundance of liquid, I had to spoon the liquid over the apples as it cooked. 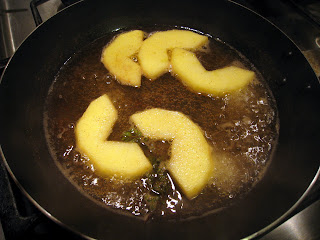 It turned out really good! The wine combined really well with the apples - and in the end the wine ended up tasting like a sweet apple cider. 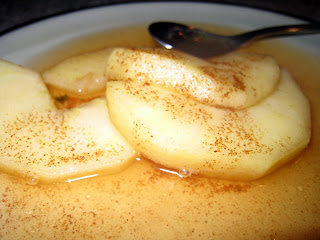 I finished eating all of our stick-chicken leftovers the other day, but we still had some extra potatoes left over. Rather than throwing them out, Laura suggested I try making potato pancakes by cooking them a bit more in the frying pan. I added a bit of olive oil to the pan, shaped the mashed potatoes into a pancake and heated them in the pan. I also added some Mexican hot sauce. It turned out really well. Much less boring than old mashed potatoes. I even got pretty good at flipping the pancake over with a flick of the wrist! 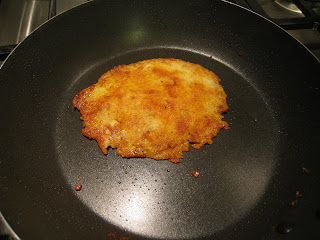 This isn't really an experiment - but it's really good! I sliced some tomatoes added some really good feta cheese we got from the Milk Pail (which has a really good variety of cheap, but excellent cheeses). I sprinkled on some lemon thyme, a pinch of kosher salt, and a drizzle of really good olive oil. It's really excellent (especially if the tomatoes are really ripe). 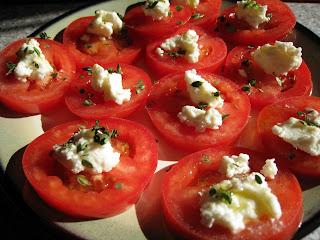 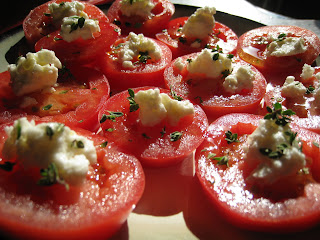 Posted by Unknown at 5:47 PM
Labels: experiments, photos
Email ThisBlogThis!Share to TwitterShare to FacebookShare to Pinterest