A long time ago, Laura asked me how to prepare leeks, and I found this recipe online. I'd never tried, it but Laura said it was pretty good. I decided to make leeks for Easter, even though I've rarely eaten them, let alone prepared them. 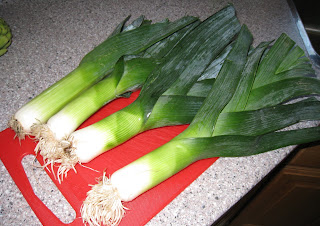 Raw leeks - the recipe called for 6-8 leeks. Leeks very in size by a lot. I only had 4 leeks for five people and it was more than enough. 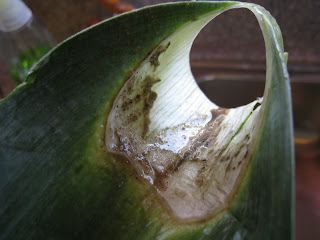 While reading about how to prepare leeks, many sites cautioned that leeks are really dirty and need to be washed thoroughly. It's true! Check out all that grime! 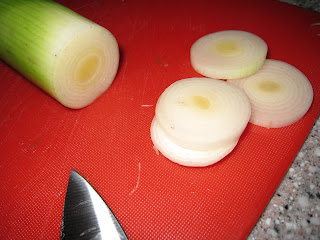 I decided to cut my leeks into rings. Normally when preparing leeks you cut down the stem in order to open it up to clean. The way I did it was to cut the leeks into rings first, then wash. 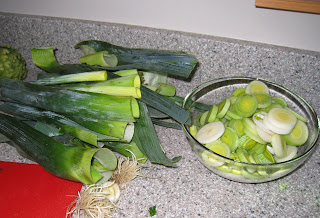 There's lots of waste - only the bottom light green/white section is eaten, the rest is discarded or used in stocks (I considered making vegetable stock, but thought that was bit ambitious). 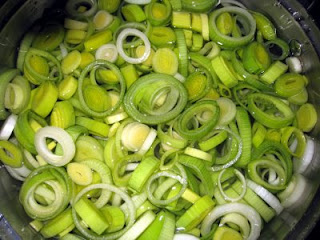 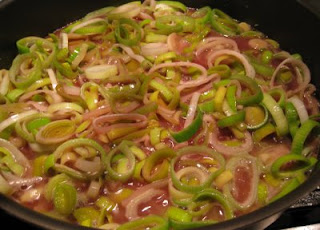 Drunken leeks, just about ready to serve.
Recipe
As I mentioned before I found the recipe here: http://homecooking.about.com/od/vegetablerecipes/r/blv272.htm
Just in case that link goes away, the abridged recipe is:
Add leeks + a few cloves of crushed garlic + 2 tablespoons of butter to a skillet at medium high. After a few minutes, add a good dose of red wine - I added about a cup. Add a splash of red wine vinegar (I used sherry vinegar). Season. Cook covered, until leeks are tender.
This recipe was decent, but I don't think I'd rush to cook it again. I think I'm just not the hugest of leek fans.
Posted by Unknown at 4:14 AM
Labels: JAM, photos, recipes
Email ThisBlogThis!Share to TwitterShare to FacebookShare to Pinterest