We were at Sigona's a couple days ago I picked up some local Asparagus (which is in season now). We didn't really have any plan for what to do with them and they sat in the fridge for a couple days. In the mean time - I received a new coupon from Sigona's for a free wedge of brie + a bottle of wine with any purchase over $30.

And that's how we ended up making this recipe - searching for Asparagus and Brie. I found the recipe on the California Asparagus Commission website. The recipe is the winner of their recipe competition, written by a line cook from Le Bernadin (one of four 3 Michelin star restaurants in NY, and 20th best restaurant in the world according to Restaurant magazine. 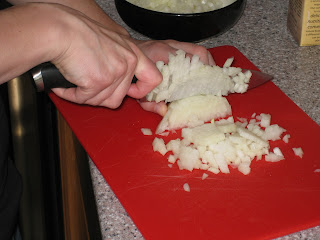 Laura dicing the onions. She's gotten pretty good at it (much better than me). 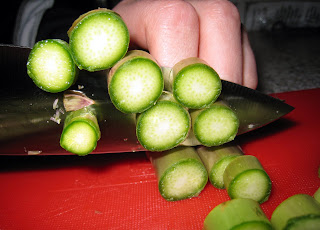 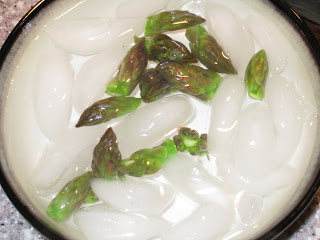 Blanching the asparagus tips, to be used as garnish. Before the ice bath, these were put in boiling water for a short time. 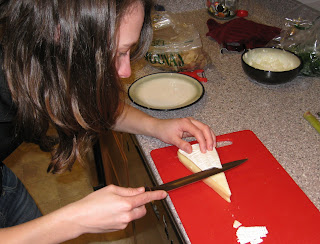 Shaving the rind off the brie. 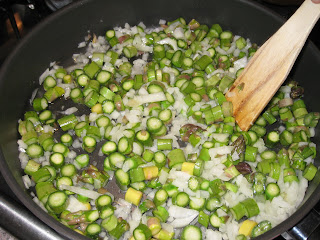 Cooking the asparagus and onions in hot oil. 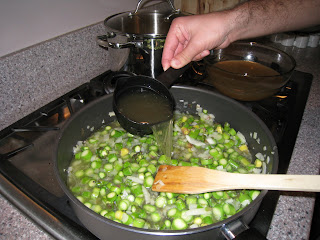 Adding our freshly-made chicken stock to the asparagus. 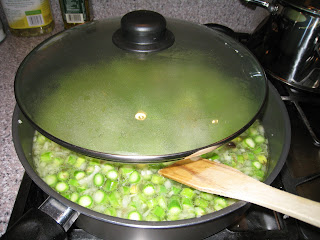 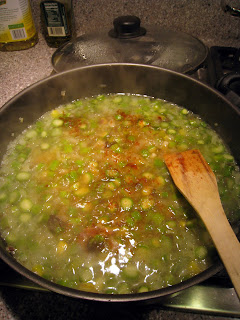 Added cayenne and pepper. I think we added a bit too much, because the spiciness of the cayenne overwhelmed the asparagus flavour. 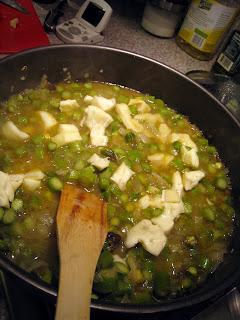 Brie added to the soup. 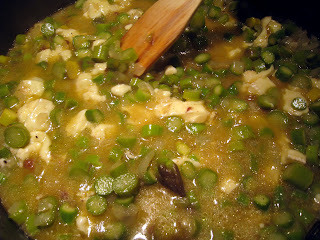 Starting to get creamier 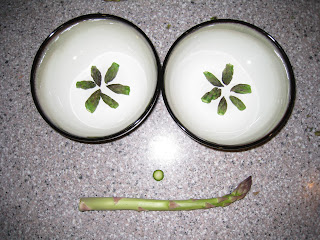 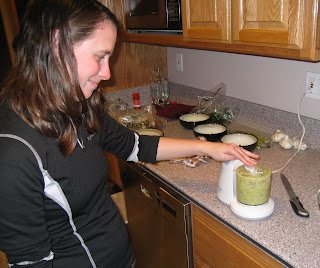 Unfortunately we had to blend the soup in batches, in my micro-food processor. It was very inconvenient. 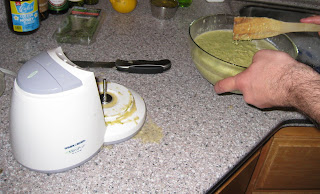 We made a pretty good mess with the food processor. 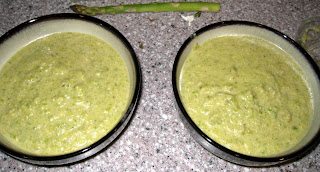 I'm sure this would look nicer if we could get the soup really smooth - with an immersion blender. It was very tasty though - I added a few drops of truffle oil over the top of the soups before we ate them.

The soup was very good - but really rich. In the future, I think I'd try to ensure smaller portions, or perhaps a healthier, less creamy soup.

The recipe can be found here: http://www.calasparagus.com/foodservice/2006CAC_winner_crutchley.pdf

Just in case that ever gets taken down, here it is:

Cut off the tips off the asparagus; blanch. Reserve for garnish. Roughly cut the remainder of stalks into 1/4" length.
Add asparagus, onion and salt to hot oil. Cook slowly, stirring occasionally, over medium heat until vegetables are soft, about 7 minutes. Do not brown.
Add chicken stock; cook, partially covered, on medium heat until vegetables are very soft and aromatic, about 15 minutes.
Stir in Brie until thoroughly incorporated; do not boil. Puree ingredients until as smooth as possible. If necessary, thin soup with additional chicken stock. Strain.
Put 6 asparagus spears into the bottom of a serving bowl. Pour in 9 ounces hot soup into bowl. Garnish with a few drops of truffle oil and some chives.

Posted by Unknown at 4:47 AM
Labels: photos, recipes
Email ThisBlogThis!Share to TwitterShare to FacebookShare to Pinterest