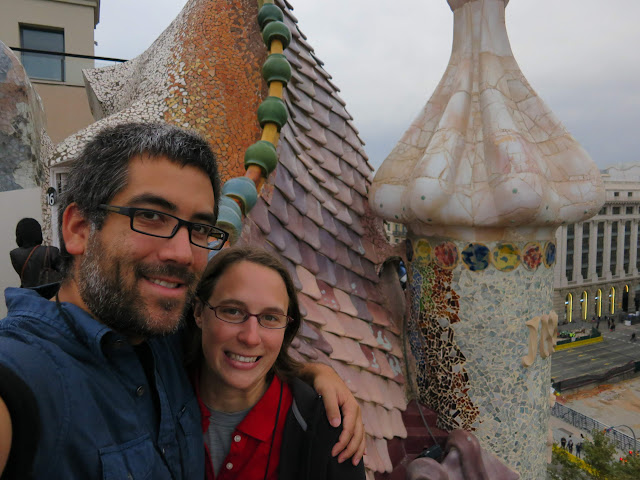 Click Here to Check out our Entire Barcelona Album 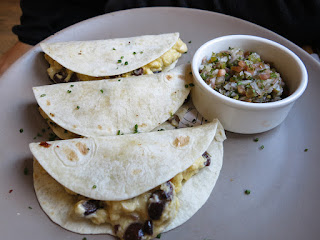 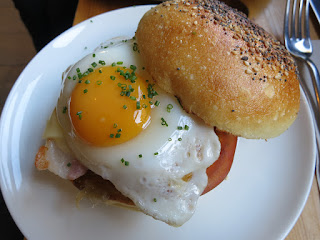 We arrived in Spain early in morning of October 28th (last year). Our total mileage driving in Spain was 2576km!! !We dropped off our rental car, and had a few hours to kill before we could get into our Airbnb Apartment.  Our hosts had emailed us some restaurant recommendations, and so we walked to one of the places, called Cafe Federale. There was a line outside, but we decided to go for it, and we happened to get the last table for two! The food was great, Jerome had a breakfast burger and I had breakfast tacos! After that we headed to our apartment, and met up with the nice guy who was running the airbnb. The cleaning person hadn't come, so he let us in, and set to cleaning while we went out to explore. We spent the day wandering around the city. We walked down to the waterfront and through the gothic quarter. 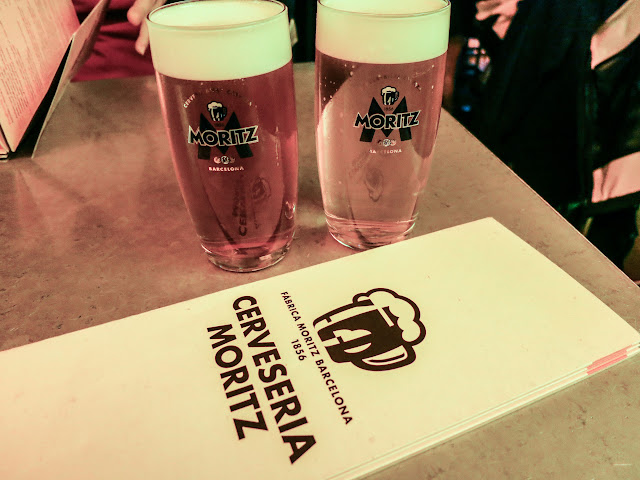 We found the Cerveseria Moritz and decided it would be a great place for dinner. They had really good and interesting beer selections, and excellent food and mussels. We had a lovely evening at the brewery! The next day we slept in, did some laundry and relaxed a bit in the morning. We found an Indian restaurant for lunch with a really tasty lunch special. We walked all the way to the Sagrada Familia, but found out they were sold out of tickets for the day so decided to go back tomorrow. We went to Olympic Park right on the water, and wandered around for the rest of the afternoon. We enjoyed the Moritz brewery so much, we went back for dinner again! 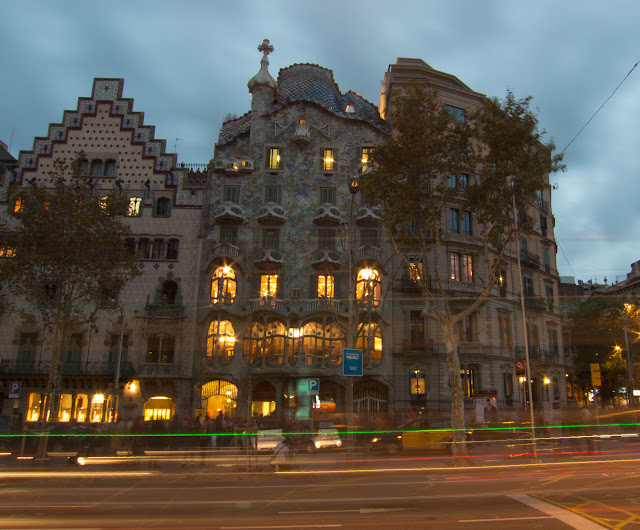 The next morning we got up and walked all the way to the Sagrada Familia. But the lines were very long, and we found out we could pre-buy tickets online and print them the next day, so we opted to go back yet again tomorrow. Instead we decided to see another of Gaudi's works - Casa Batllo. It is a really cool building in the middle of a block of regular buildings, that Gaudi designed for a family who lived there in 1904. It really stands out! 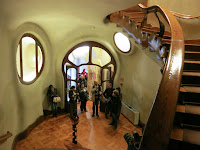 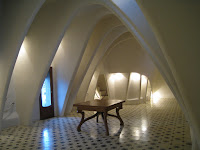 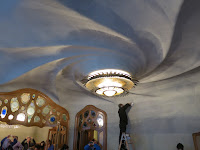 There is hardly a straight line in the entire building! The windows, walls, ceilings, everything is curved. He even designed and built furniture to match it. The upper floor is all built with Gaudi's Catalan arches. You could even go up to the roof which looks a bit like a dragon with scales (see first picture at the top). It was really interesting seeing such a different kind of architecture. Just after we left, we got caught in a crazy rain storm. The rain was coming down the hardest I think I ever remember seeing! We ran into a little bar and waited it out for a while with a drink, then headed for a typical Barcelona dinner at Senyor Parellada, of fish stew and paella. We then walked home in the much softer rain, and had to dry our clothes! 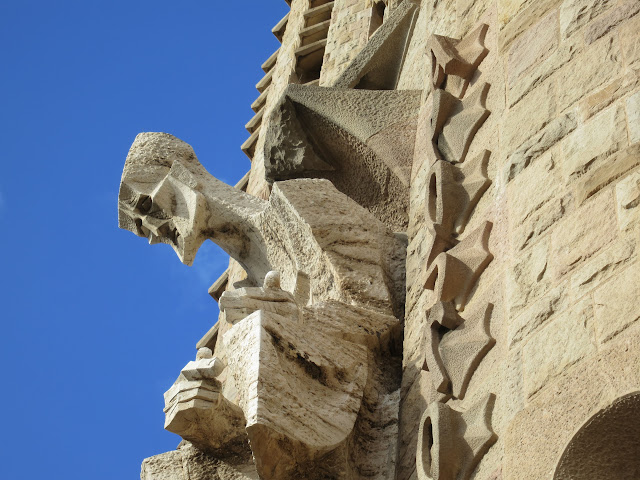 Having finally got our tickets, we were up early the next morning to walk back to Sagrada Familia and finally got to see it all! It was a beautiful day, and the cathedral is spectacular! It's been in the works for over 100 years, and still has at least 10 left before it is done. It is gorgeous though. Each face of it, is a different style and represents something different. We spent 6 hours just walking around, looking at everything, taking tons of pictures. You can see all the rest of the photos here. 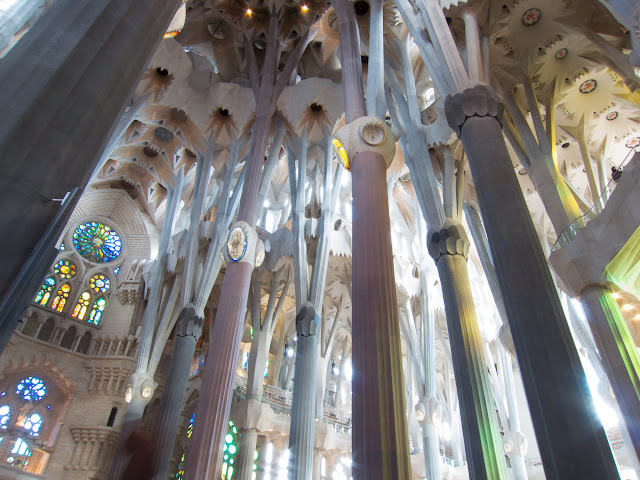 The interior was just as spectacular as the outside, with crazy mathematically designed arches that branch out from themselves, and amazing stained glass work. We also got to go up one of the towers and got a great view of the city, and the building from up top. 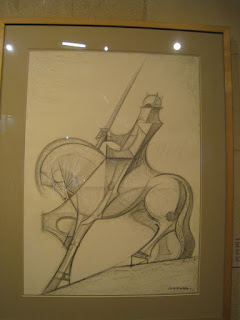 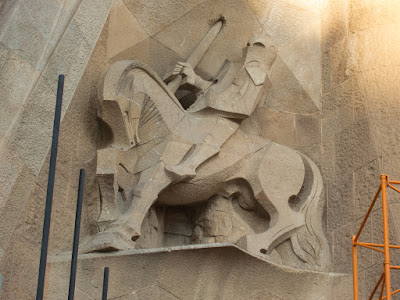 One of my favourite things was the display in the basement of all the design drawings and models that were done and built to figure out how to build it and make it look. It was really neat seeing initial sketches and then being able to see the finished sculpture up on the wall. 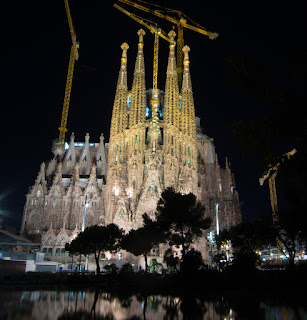 By the time we were done, it was almost dark, so we grabbed a coffee and waited for the sun to set the rest of the way, and then spent some time doing some night photography of the Sagrada Familia. They do a great job of lighting it up at night, so it was really fun. 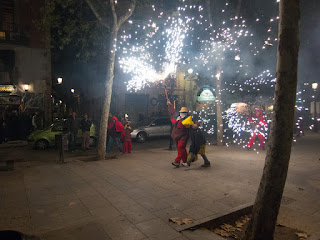 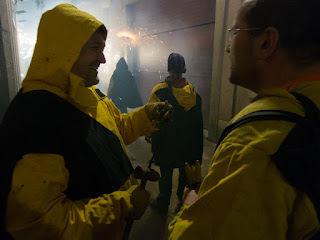 We headed back to the Gothic quarter to find some dinner, and got drawn in by what sounded like fireworks going off. We followed our ears, and were treated to an amazing show for the evening. It was October 31 and All Hallow's Eve. A big group of adults and children were all dressed up in yellow or red and black tunics. Each person carried a stick with a nail and a clothespin on it. One of the adults would put a firecracker on the nail and then the clothespin on top to stop it from flying off. Another adult would then light the crackers one by one, as groups of children and adults skipped down the street waving and twirling their sticks. It looked like so much fun! We took a bunch of videos trying to capture it all. This one is pretty representative of the chaos and fun! It was an amazing end to our stay in Barcelona. The next morning we headed off to Sweden! But more of that in the next post.


Click here for the rest of the videos.
Click Here to Check out our Entire Barcelona Album
Posted by Unknown at 9:30 PM
Location: Barcelona, Spain
Labels: holidays, JAM, LAM, Spain, Travel
Email ThisBlogThis!Share to TwitterShare to FacebookShare to Pinterest