Jerome -- It's been 5 days since we climbed Mount Kinabalu, and our legs are still sore.


Mount Kinabalu is the 20th highest peak in the world by topographic prominence (which means its sticks out more vs the surrounding mountains). The peak is at 4095 m (13,435 ft).  It's also known for being a fairly "easy" climb - no special equipment or experience is necessary.

We arrived at the park the night before our climb, in time to have dinner and pack our day packs for the climb (rather than our much heavier backpacks). We only brought the bare essentials: a change of clothes, toiletries, a warm base-layer (it's only 3 - 5°C at the summit at night), rain jackets, headlamps, cameras, gloves, some snacks, and 4L of water. We also rented a trekking pole for each of us - I think it helped a lot, especially to take some pressure off our knees during the decent. We left the rest of our luggage in storage at the park headquarters.

We were up early to meet our mountain guide and get started. Our guide was Ananias, a local from Ranau, who has been a guide for about 2 years. As a guide, he climbs to the summit 3 times each week - hard to imagine, once was hard enough! Before guiding, he worked as a porter - hauling gear and supplies up to Laban Rata. Work for porters is even harder - they go up and down to Laban Rata 5 days per week and carry heavy loads - propane tanks, drinks, food and other supplies/equipment! 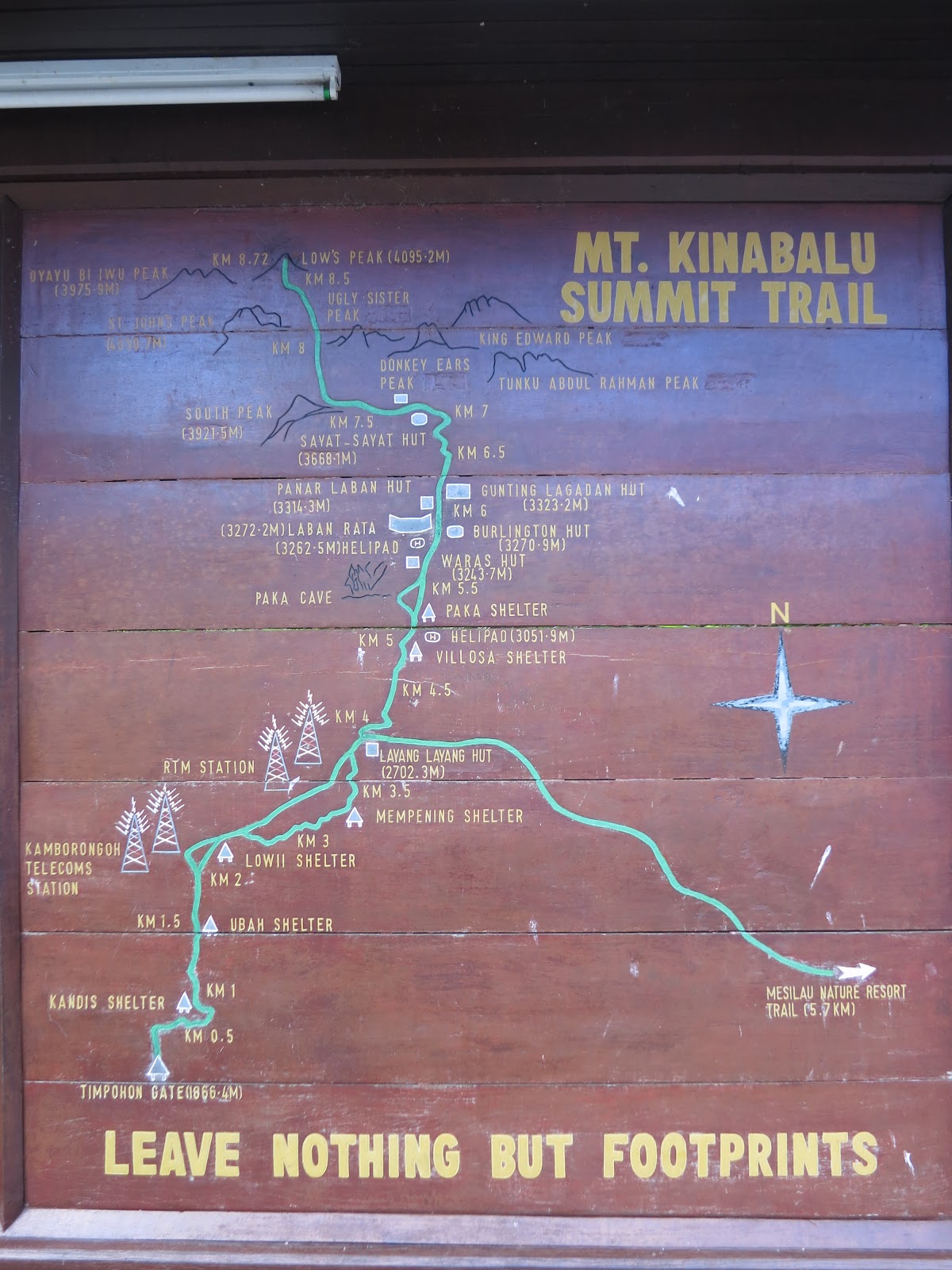 
The first section of the climb consists of a mix of wooden stairs and rocky boulders. There's lots of vegetation on both sides of the trail during this section. It's pretty much continuously up - very few flat sections. Every km, or so there was a little rest area with some shaded benches - nice to be able to catch our breath. We had a quick lunch break at the 4 km mark. As we ascended, we definitely started to notice the altitude. Our legs didn't feel very tired, but it was harder to catch our breath. For the top 3 km or so we couldn't see much beyond the immediate trail - lots of clouds / fog blocked the view towards the summit, as well as to the valley.

It was quite a relief to arrive at Laban Rata. Laban Rata consists of a cluster of small lodges for climbers to stay, and a central lodge that had a restaurant. It was actually pretty cool already (probably something like 14/15°C) so we had some tea when we arrived. It really hit the spot! After a quick, cold shower and new, non-sweaty clothes and I was feeling much better.


After a buffet dinner at 4:30 pm we headed for bed. Bed was a small, unheated room with three bunk beds. Mine squeaked every time I moved. 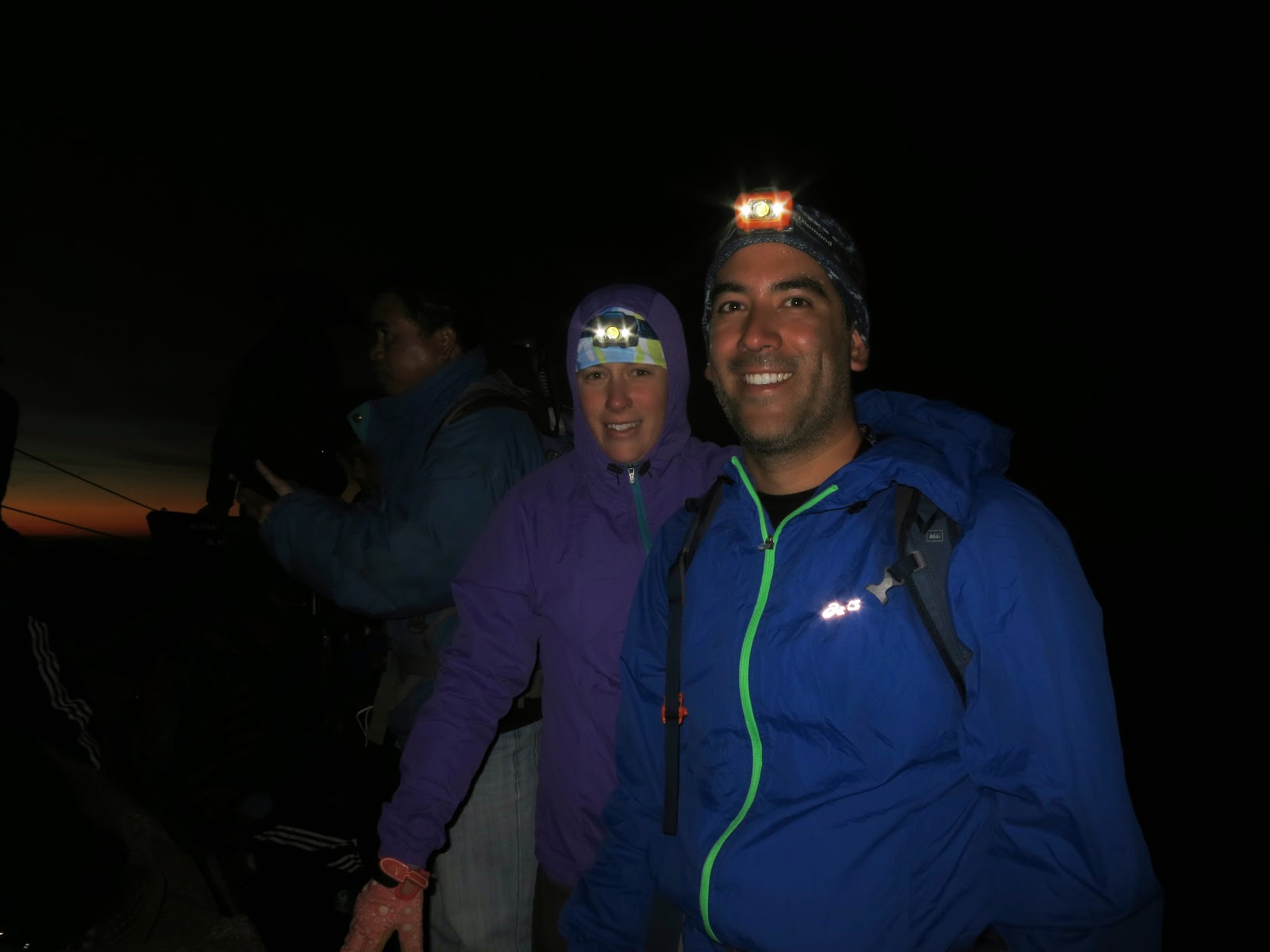 We were up again at 1:30 am.  We put on all our warm clothes and after a quick "supper" began our final ascent.  Unlike the previous section when the starting times are relatively staggered, nearly everyone leaves Laban Rata at about the same time for the summit.  At least initially it was a pretty long, slow-moving queue of climbers.  It was actually sort of neat to look down and see the long line of headlamps snaking up the mountain.

The first section of the climb is just stairs, but the we quickly reached the "ropes section".  This section starts just about at the tree-line. A thick white rope is anchored into the rocks and is used to pull yourself up inclines, keep stability on ledges, and as a general marker for the path.  Laura was most nervous about this section of the climb, but she didn't have any problems at all.  Quite a few other climbers did abandon the climb at this section though.  I actually liked the ropes section the most - it's much more interesting than the endless stairs!  The crowd of climbers thinned / spread out pretty significantly at this point.

As we ascended it got colder and colder. The climb was enough effort that we were sweating hard, but anytime we stopped our wet clothes quickly chilled us.  A very weird combination of sweating and freezing.  We were dressed pretty lightly compared to other climbers - we saw one guy wearing a full snowsuit (including the snow pants)!

The last kilometer or so is a large inclined granite plateau, and finally a more inclined ascent up Low's peak.  We arrived just as the sky was beginning to lighten with the rising sun.  It was quite spectacular to see our surroundings after having climbed in darkness.  We were above an ocean of clouds. The peak itself was a bit of a zoo, not too much room and a lot of climbers jockeying to take pictures.  We didn't stay at the peak for too long before starting the decent (partially because of the long decent ahead of us, partially because we were freezing).  It felt great to start the decent after going up for so long! And it was really nice to have great views the whole way down. 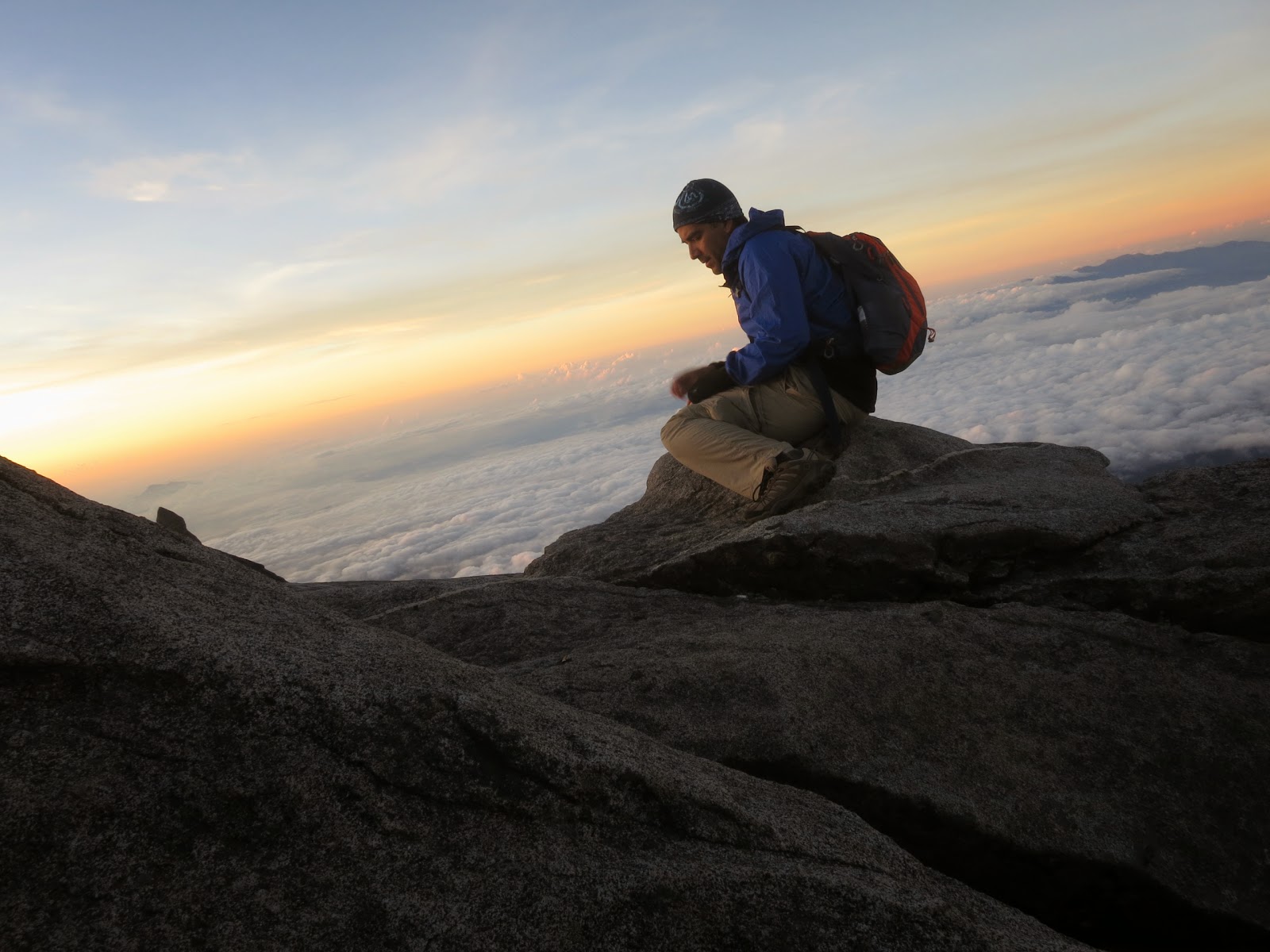 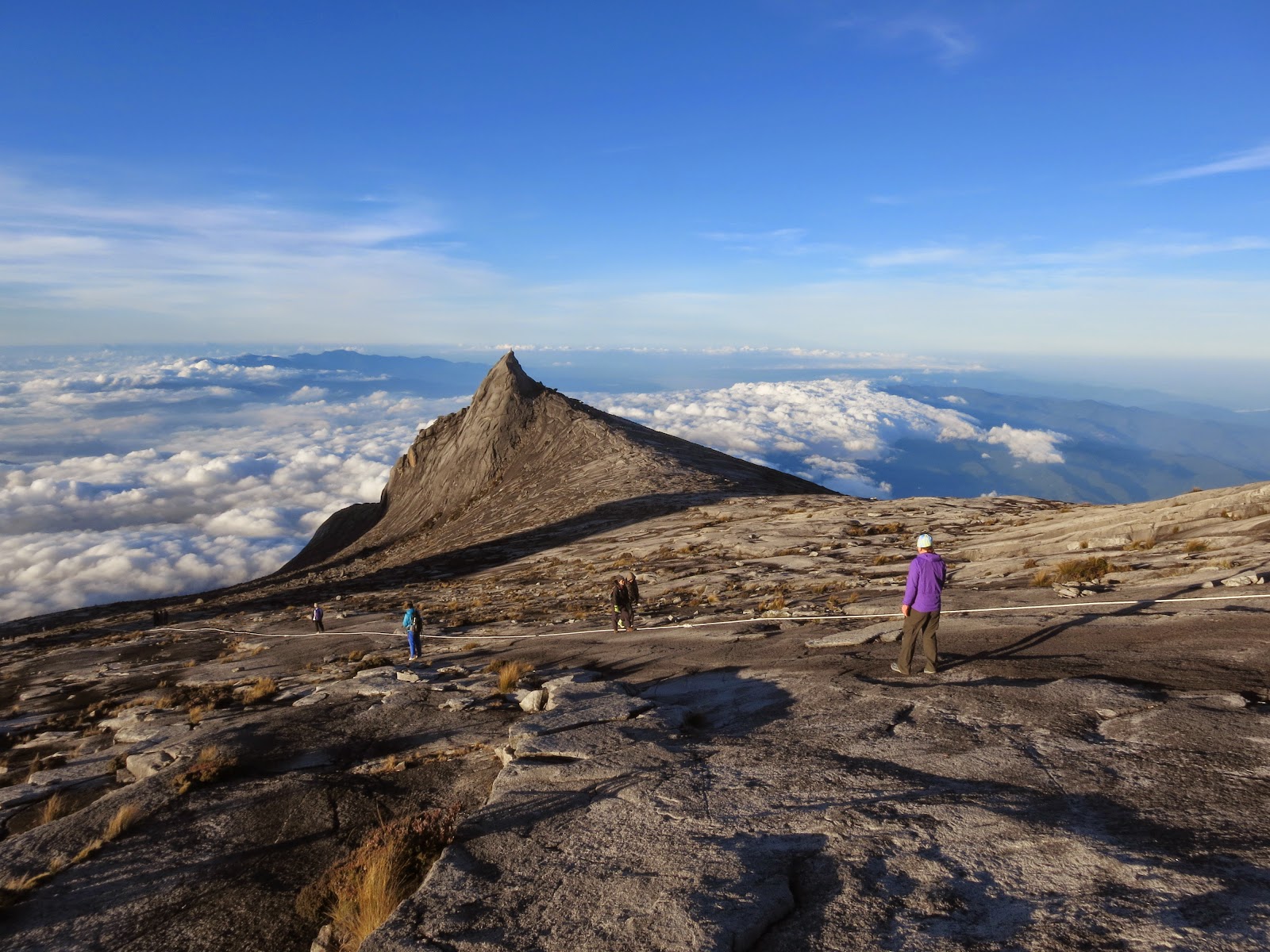 By 8:30 we were back in Laban Rata for breakfast and a quick break before our decent to Mesilau.

There are two routes up Mount Kinabalu, one is about 6 km from Timpohon Gate and the other is about 2 km further to Mesilau Nature Resort.  We booked our final night at Mesilau so that we'd be able to try both routes.  The first couple km were pretty good, but clouds and fog rolled in and out knees started to hurt from the decent - I think we were just counting the km for the last half of the trek.  I was hoping that since Mesilau is at a higher elevation than Timpohon (and the trail is longer), it would mean that the decent would be more gradual.  Instead we had an extra 300 m  ascent on the way down!


We were super happy to arrive at Mesilau. A bit to our dismay we found that the resort is set up as multiple buildings with fairly steep hills inbetween them.  Our lodge was up a hill and was the furthest from the reception!  It was great to have a shower and get some food though.  Eugene, the restaurant's manager was particularly nice and arranged a special late lunch for us.

All-in-all we're both pretty proud of having made it up Mount Kinabalu.  The one thing I didn't like is that I found that I had to look down the whole time because the paths are uneven and require your complete attention.  The clouds also make the climb fairly monotonous as you don't get to see the progress of your ascent.  It would have also been nice to have more time to explore the summit - maybe an extra night at Laban Rata (I'm not sure if that's allowed).  Laura's reserving the right to veto any future mountains... but I'm already trying to convince her that we should try Half Dome in Yosemite. 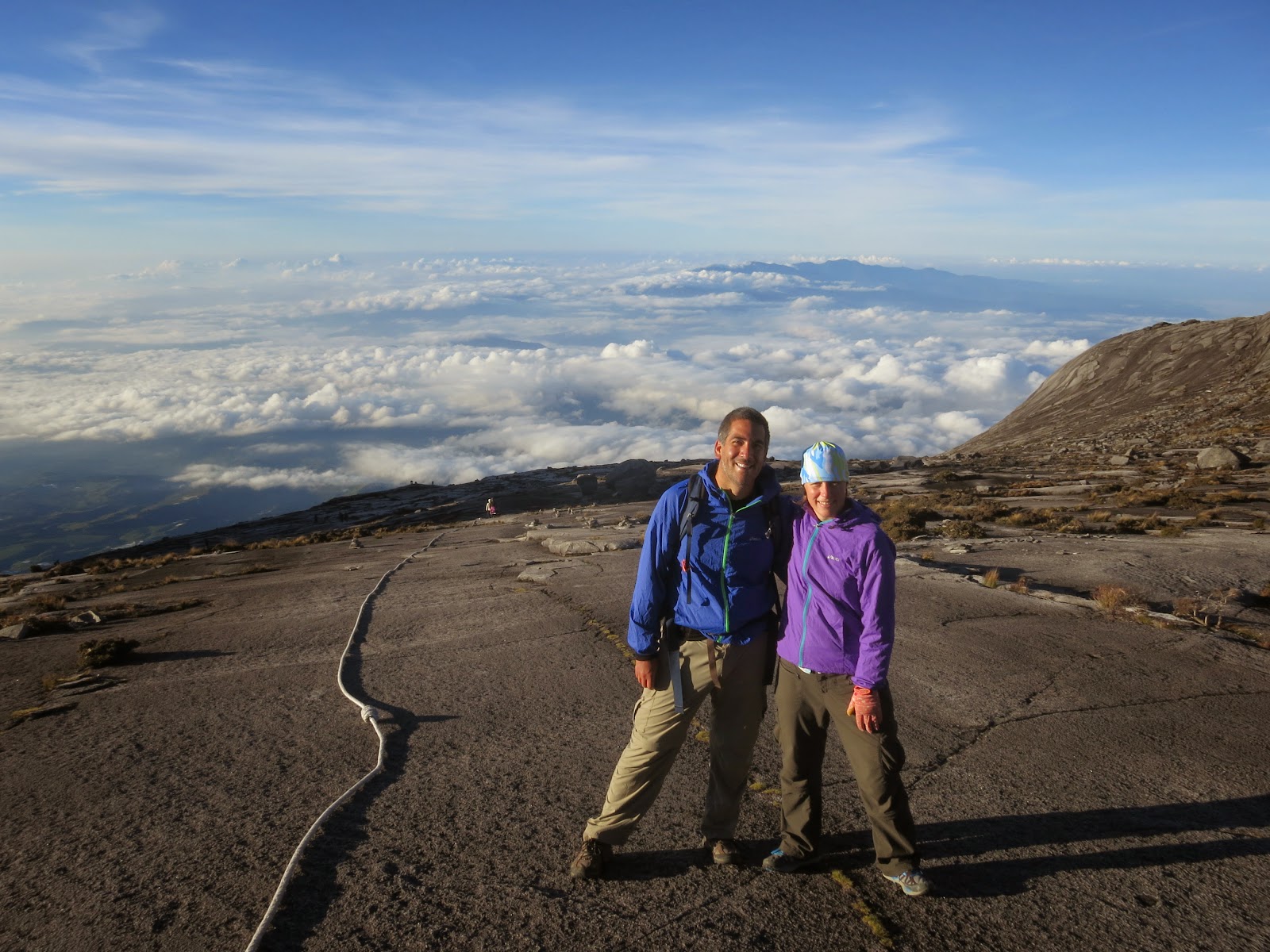