We left Munich and headed to Austria where we spent a week visiting Salzburg, Hallstatt and Vienna.

We were only in Salzburg for one night, but got to see quite a bit of it. We did a lot of walking all around the old town seeing lots of neat squares, the river, some really cool gardens including a dwarf garden and the house where Mozart lived. We also tried some Mozartkugels which are a chocolate candy balls inspired by Mozart. We happened to find a really cool monastic brewery called Augustiner that had an awesome beer garden. There you picked your own cup, small or large, rinsed it out in a neat fountain, and then passed it to a guy who filled it up from the keg.

We left Salzburg for Hallstatt, which is a very small village nestled on the side of a mountain beside a lake. It was historically very important as it is where the first salt mine was started over 3000 years ago, and therefore allowed the preserving of food. We rented an electric motor boat one day to go all around the lake, and a paddle boat the next day so that Jerome could go swim in the middle of the lake. It was really beautiful. We went to a concert in the square of the local marching band. If you gave them a donation, you got a shot of schnapps from a tiny little keg! We also went down in the old salt mine, which was neat and fun, as they had several large wooden slides to help you get around the mine faster.

After Salzburg we headed to Vienna, where we stayed with a very nice couple in their apartment. The very first night we stumbled upon a big harvest festival in a big square. It had little stalls for all the local area farms who were selling food and drinks and things. There was a big band, and floats with wheat crowns and lots of people dressed in traditional clothes. It was a lot of fun! We did a lot of just walking around the city as it is very pretty, and the old buildings are beautiful. One of the days we rented segways for a few hours and rode them out to the island on the Danube, which was pretty much deserted of people as I guess the swimming season was over. We also attended a concert in the famous Musikverein music hall where we heard classical music and even the Danube Waltz. 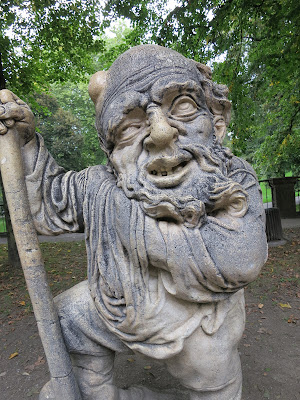 Posted by Unknown at 4:00 AM
Location: Austria
Labels: Travel
Email ThisBlogThis!Share to TwitterShare to FacebookShare to Pinterest