Well despite or perhaps because of the disappointment of our last fish box being cancelled, we were very excited to get this weeks box. Our email said that it was the same fisherman as last time. They also said that some of the orders would be Black Gill Rock Cod and that others would be Sablefish again. It was fun not knowing which one we'd get. Jerome picked it up and it was Sablefish again! While it is a bit sad that we didn't get to try our hand at a new type of fish, we both really liked the sablefish and had noted several other recipes to try, so overall things worked out. We based our process on this recipe we found online. 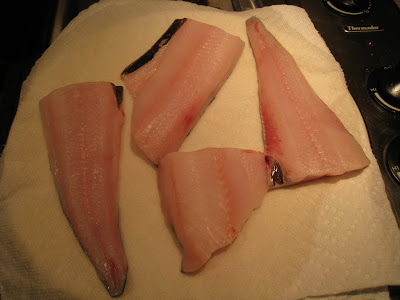 Once again, it was really nice fish, filleted, but with skin on and bones in. We rinsed and patted it dry. It seemed like we got more this time. In addition to these pieces, there was a full length fillet which we're saving for another recipe. 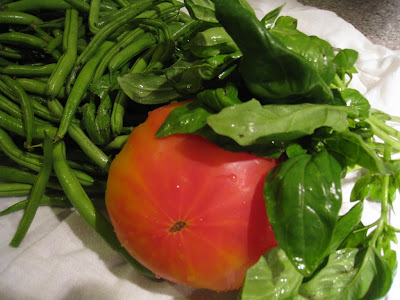 We were thinking ahead and went to the Los Altos Farmer's Market on Thursday to stock up on fresh vegetables that would go with any kind of fish. We got a giant bag of green beans, a bag of awesome and giant heirloom tomatoes and some really nice basil. 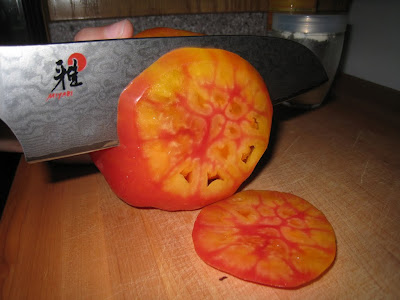 Heirloom tomatoes are so tasty and awesome looking! If you haven't tried them, go out and find some. They are often interesting colours, and not always firm like generic tomatoes. To start this recipe we put olive oil and lemon juice in a baking dish. We then put the fillets in and turned them so they were coated. We put them skin side down then sprinkled them with salt and pepper. 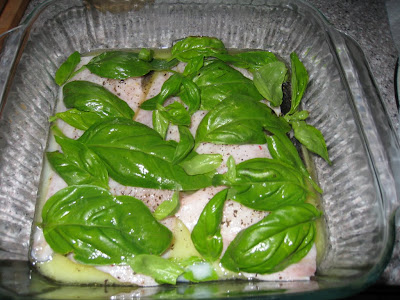 Next we covered it with a layer of our fresh basil. 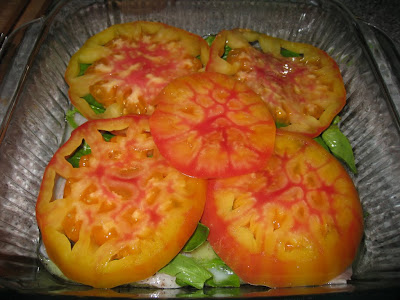 Followed by a layer of heirloom tomatoes. 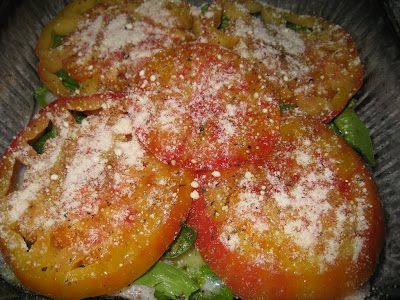 Then seasoned the top with lemon salt, pepper, and Parmesan cheese.
We then covered it with tin foil and put them in a 400 degree oven for about 20-25 minutes, checking every 8-10 minutes - until the fish was flaky. 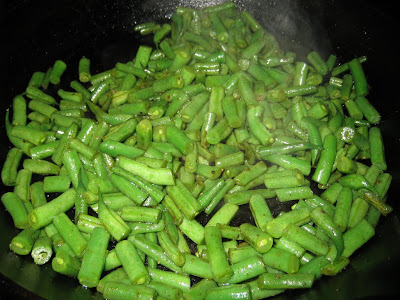 Jerome took charge of the green beans and pan fried them. He raided our spice drawer and seasoned them with garlic powder, salt, sage, chili powder, harissa oil, and olive oil. 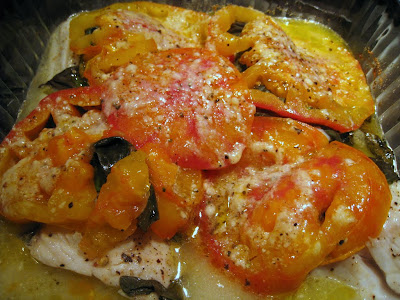 When we took it out of the oven the cheese had melted and the fish was flaky and nicely cooked. 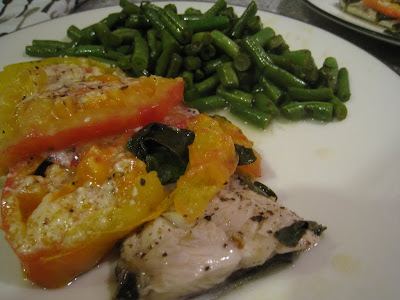 Overall this dinner was really awesome. The tomatoes were very flavourful and juicy, the fish was really rich and buttery despite just being baked - I guess that's why they also call it Butterfish sometimes! Jerome's spiced green beans were great with a bit of a kick to them. It was also nice that it was so easy to prepare, and all done in one dish - well and the skillet for the beans. All in all we were both very happy once again with the end result and would make it this way again for sure!
Posted by Unknown at 2:33 PM
Labels: farmer's market, Fish Box, JAM, LAM
Email ThisBlogThis!Share to TwitterShare to FacebookShare to Pinterest