The fish of the fortnight was Sablefish! It came with this note about where the fish came from which was interesting: "Sablefish is also known as Black Cod and is brought to us by local fisherman, Don Pemberton, of the F/V Stacy Joanne. To learn more about Don, you can read his bio on the Faces of California Fishing site here." They also recommended a Miso recipe in case you were stuck and not sure what to do with it, but Jerome and I had other ideas. There was enough fish for two meals, so we decided to try two totally different methods and flavours. Jerome took the lead on the first recipe going for an asian style preparation. 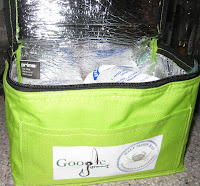 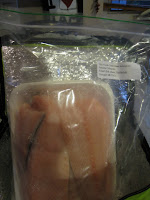 This is how we received the fish, nicely packaged and labelled and brought home in our little cooler. 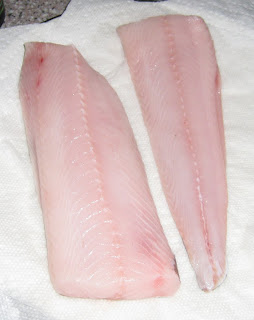 It was really beautiful fish. The bones were still in and the skin on, but we left them to remove when we were eating them. The fillets were cut really nicely, and in pretty even portions so we didn't have to worry about them cooking unevenly. We rinsed and patted the fish dry. 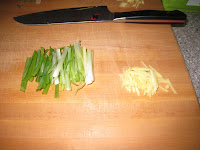 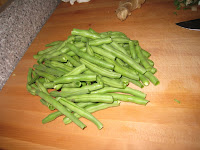 Being the sous-chef, I was instructed to julien the green onions and a whole bunch of ginger. As well as being in charge of cooking the green beans. 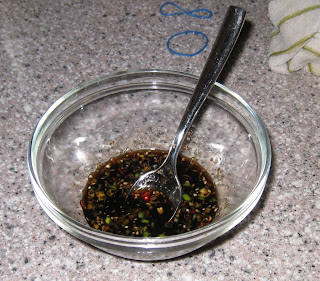 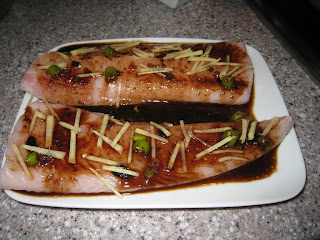 We poured the marinade over the fish, topping it with the ginger. Just before this we had to plan ahead an figure out how to build our own steamer since we don't have one. We marinated the fish on the plate that would be used for steaming for about 15 minutes. 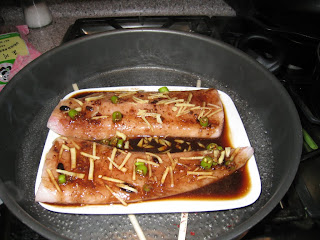 Here is our custom steamer. We took our large saucepan, and placed two chopsticks in it. Then we filled it with enough water to not quite cover the chopsticks and brought it to a boil. Once it was ready we placed the  conveniently sized plate on the chopsticks and voila! 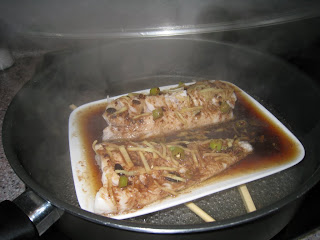 We steamed it for about 5-8 minutes until it flaked beautifully when we poked it. 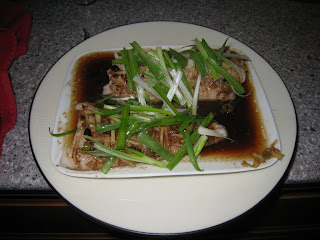 The final step which Jerome had seen in a youtube video which I can't find was to top it off with green onions then heat up some oil until very hot, and drizzle a tiny bit of the oil on top of everything. It makes this crazy sizzling noise which apparently is the key and it sort of flash cooks the onions where it hits and finishes everything off.
We were both really impressed and happy with how it turned out. We were apprehensive at first never having cooked this type of fish, and not wanting to ruin it, but  not to worry, it was stellar! The flavours, though strong, didn't overpower the fish, and it was so flaky and moist.
Stay tuned for part B where I try my hand at baked lemon butter sablefish!
Posted by Unknown at 11:55 PM
Labels: asian, Fish Box, JAM
Email ThisBlogThis!Share to TwitterShare to FacebookShare to Pinterest