I think I made this recipe two or three years ago randomly, and liked it. So last year for St. Patrick's day I dug out the recipe and fully intended to make it, and then at 6 pm when Jerome said he was on his way home, I read the actual directions which involve several 1 hour simmering steps, and put it off until the weekend, and then used the beef for something else, and then we drank all the Guinness I had bought for the occasion. And so it was forgotten.
This year, I was more prepared and actually remembered ahead of time, so planned to have it on the weekend afterwards. I even made sure I hid two of the bottles of Guinness, to ensure we'd have enough to make it. I'm drinking the last of the 6 pack as I write this which is why I remembered I should write about it. That and it was darn tasty.
The recipe is a Jamie Oliver one and can be found online here. Aside from the stewing and simmering for several hours it's super easy: 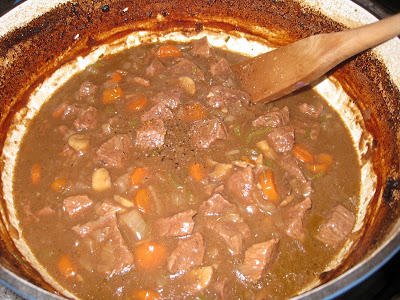 Once you get everything chopped, you just let it cook,
Stir a few times if you think of it.

Roll out some puff pastry into a casserole dish,
then pour in the steaming stew.
(I failed to take a picture of the extra sharp cheddar that gets sprinkled on in between these two pictures) 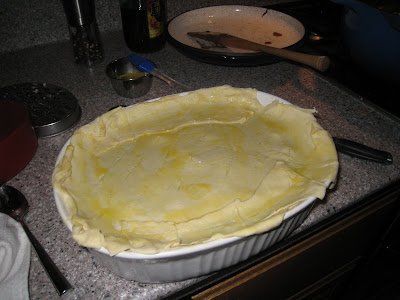 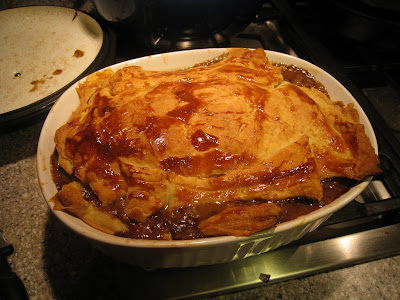 And you end up with this!!
My puff pastry shrank a bit and looked funny, (or perhaps it was "Rustic" like Jamie said it should be)
but mixed with the cheesy, stout-y, beefy goodness, it was divine!
Try it sometime!
Posted by Unknown at 9:31 PM
Labels: beef, holidays, LAM, recipes
Email ThisBlogThis!Share to TwitterShare to FacebookShare to Pinterest