A few weekends ago, we decided to have an Iron Chef type battle. We went to our favourite little cheese and vegetable store The Milk Pail Market and each picked a vegetable that looked fresh and tasty. I had an asparagus recipe in mind, and was lucky enough to find some great looking ones, while Jerome was winging it, and found a beautiful eggplant. We decided to prepare them at the same time and then cook the dishes one after another and eat the first one while the second one was cooking.
JEROME: EGGPLANT PARMESAN 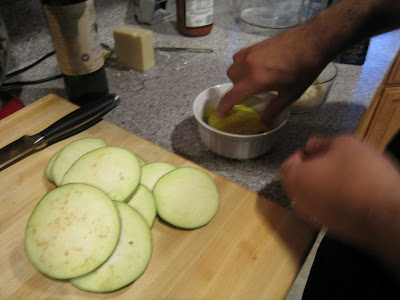 Jerome went first. He chose a recipe for Eggplant parmesan. Here you can see him breading his eggplant slices in Panko breadcrumbs . 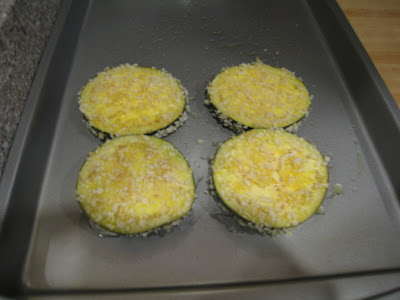 They were then baked or broiled to cook them most of the way through. 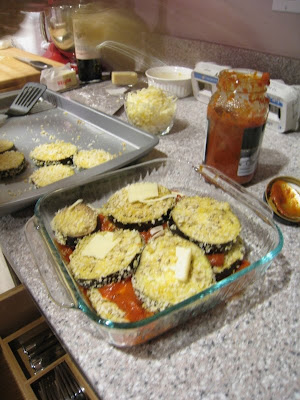 After this, Jerome layered them with old cheddar cheese and angry spaghetti sauce. 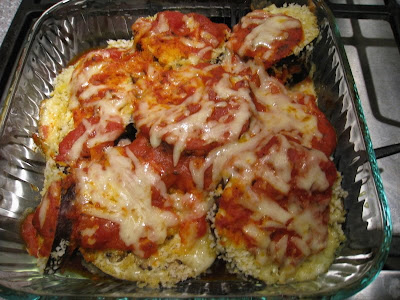 Here is the final product. It was very tasty, and a very healthy and inexpensive meal. We thought that next time we might not layer them up but put them on a flat tray in a single layer. But definitely a recipe we'll be making again.
LAURA: CRISPY ASPARAGUS POTATO TART
I decided to make an asparagus and potato cheese tart in phyllo pastry that I had found in one of my Jamie Oliver cookbooks and that sounded pretty good. Recipe 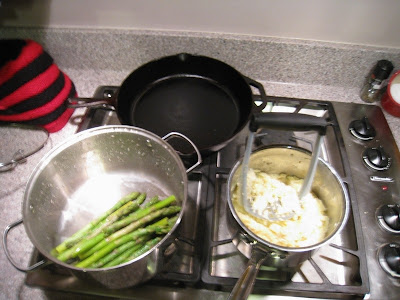 For the preparation, I blanched the asparagus. Next I boiled and mashed a potato adding some old cheddar cheese, whipping cream and eggs and some nutmeg and pepper for seasoning. 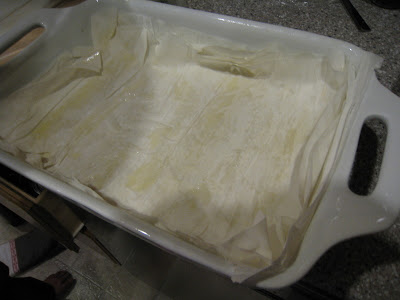 Next I layered 4 sheets of phyllo with melted butter brushed in between. 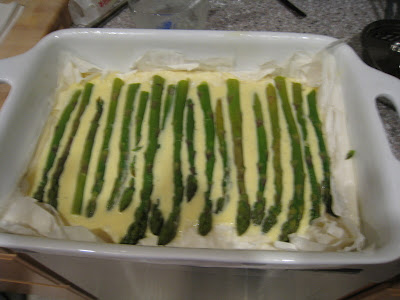 Then added in the potato mixture and placed the asparagus across the top. 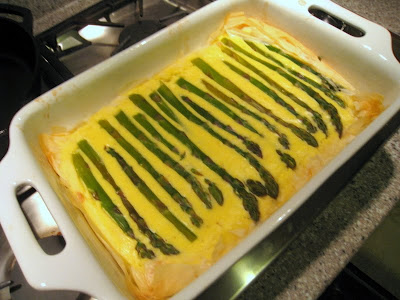 This is the final product. The phyllo browned up nicely and was nice and crispy. This dish was also very tasty, but richer and a bit less healthy. We would make this one again, probably for a bigger crowd though, we ate it for leftovers for the whole week! It would make a nice brunch dish I think.
All in all it was a very fun and filling evening of cooking and eating. The only thing we thought we'd do differently if we do another challenge is to make one dish each weekend day, as it was hard to stop eating the first dish when it was so tasty to save room for the second!
Posted by Unknown at 10:43 AM
Labels: challenges, JAM, LAM
Email ThisBlogThis!Share to TwitterShare to FacebookShare to Pinterest